Wildlife refers to the undomesticated animals and plants found in a particular area. They are not only found in forests and rainforests, but also in other environments such as deserts, meadows, plains, and even most civilized metropolitan areas. To maintain a sustainable environment, there must be a balance between animals and other life forms in an ecosystem. If deforestation rises in the forest ecosystem, e.g., species will lose their habitat completely and their risks of extinction will rise, affecting the entire ecosystem.

Deforestation for mostly industrial interests has had a significant part in the extinction of wildlife over the years. It has resulted in global warming and soil erosion, which has resulted in flash floods. As a result, wildlife’s natural habitat was lost and the issue of endangered species has been brought up. Experts estimate that between 200 and 2000 species become extinct each year. But do we realize that our beliefs were molded at the expense of destroying a living community that is now nearing extinction?

From north to south, east to west, India is teeming with wildlife, making it one of the world’s most fascinating tourist destinations. There are 564 wildlife sanctuaries in India. Here are the top wildlife sanctuaries you should visit with your family or friends to get the most out of them:

In Rajasthan, it is India’s largest wildlife sanctuary. The greatest time to visit Ranthambore National Park is during the summer months, from April to June when thirsty animals travel around looking for water. As a result, people pay more attention to them. Safaris run from 7 a.m. to 11 a.m. in the morning and from 2 p.m. to 5:30 p.m. in the afternoon. Tigers, blackbucks, peacocks, spotted deer’s, and over 250 kinds of birds can be found here, despite it being recognized as a Tiger National Reserve.

Jim Corbett National Park is located in the Uttrakhand region of Nainital and is known for its endangered animals, temples, waterfalls, and dams. There is a diverse range of vegetation and fauna, as well as the magnificent Royal Bengal tiger. This refuge is regarded as one of the top adventure destinations on the planet. The optimum time to visit is from the end of the summer to the beginning of the winter.

To plan your visit and Ranthambore safari booking in advance, visit our website online.

Is It Safe To Book Ranthambore National Park Tickets Online?

Ranthambore National Park is one of India's largest and most well-known national parks, with a robust population of tigers. Ranthambore was once the hunting grounds of the Maharajas of Jaipur and is now located near the small Rajasthan town of Sawai Madhopur.

April heralds the start of the summer season in India when the sun shines brightly and the flora and fauna sigh with relief. While certain places of India become a little hotter during this month, others are really stunning. However, where should you go for vacation in April 2022? 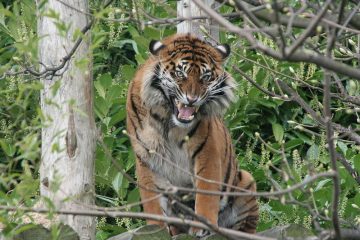 How Many Days Are Enough For Ranthambore National Park Trip?

National Park is one of India's most popular tourist destinations nowadays. Many people are unaware that it was once used as a hunting ground by the Maharajas of Jaipur.